A passionate and innovative design educator

Associate Professor and Reader, Department of Mechanical Engineering, The University of Melbourne

Associate Professor William (Bill) Lewis was a pioneer of engineering design education in Australia.  Bill was a polymath with a strong social conscience.

Bill was born in Melbourne on 18 November 1931 to Kelvin and Vivien and was their only child.

Kelvin Lewis and Edward Powell Lewis (Bill’s grandfather) established the engineering company, Kelly and Lewis in the late 19th century.  Kelly and Lewis designed and manufactured pumping equipment.  Kelvin worked in the family business and later became its managing director during the 1920s.  He continued in that role for the remainder of his working life.

Bill was an outstanding student at the prestigious Malvern and Melbourne Grammar schools.  He completed his final school year of secondary study (year 12) for the first time in 1948.  His subjects were English, physics, chemistry, and pure mathematics.  Although his academic performance made him dux of the Melbourne Grammar school, Bill felt that he was too young to begin university, so in 1949 he decided to complete another final school year, this time focusing on humanities subjects: Greek and Roman history, modern history and applied mathematics.  He achieved dux of the school for a second time.

In 2021, Bill was asked by his son (Anthony) and one of his grandsons (Jeremy) about his scholastic record, and Bill was able to recall his essay topic for the Greek and Roman history exam, that is, “The development of Athenian democracy at the time of Pericles.”  They were amazed that Bill could remember such detail after so many years.  Anthony recalled that this was typical of Bill as he possessed an extraordinary memory.

Graham Syme was Bill’s good friend for 70 years. They met at Melbourne Grammar.

Recently, Graham offered insight into Bill’s high moral principles that occurred during a chemistry class.  A teacher had made a ‘scathing sneering remark’ towards one of Bill’s classmates.  Bill stood up and said, “That is a damned lie” to the teacher.  In that era, teachers were referred to as masters, and insolence towards masters at Melbourne Grammar was a severe offence, usually resulting in severe corporal punishment.  Graham reported that the teacher was, ‘wise enough to not hear what Bill said, and turned and started to write something on the blackboard.’  Bill was prepared to stand up when he saw injustice perpetrated on his friend – an example of his fearless morality.

Bill graduated with a Bachelor’s degree with first-class honours in Mechanical Engineering from the University of Melbourne in 1954.  He then received a scholarship to train as an engineering draftsman at Rolls Royce Aerospace in Derby, England.  Bill later returned to Melbourne and worked as an engineer with Kelly and Lewis for five years.

In 1962, Bill joined the Engineering Faculty at the University of Melbourne as a lecturer.  Bill gained his PhD in the early 1970s by investigating the development of creative design skills in undergraduate engineering students.

In the 1980s, Bill was Chairman (Head) of the Department of Mechanical Engineering for two consecutive three-year terms.  In this era, the Chairman was elected by their academic colleagues.  He was regarded as an insightful leader with strong interpersonal skills.

As an academic, Bill enjoyed an ongoing and productive partnership with Prof. Andrew Samuel in the field of engineering design.  Bill’s broad and voracious appetite for learning, finely honed practical, theoretical, and pedagogical skills combined perfectly to enable him to make fundamental and long-lasting contributions to his chosen field of engineering design thinking.  In 1996, Bill was awarded the Australasian Association for Engineering Education (AAEE) Medal (Australasia) for Distinguished Contributions to Engineering Education.  Historically, this had been awarded to international professors and senior academic administrators of high standing.  Bill was the first Australian to be awarded this AAEE Medal.

Bill retired as an Associate Professor and Reader from the University of Melbourne in 1996.  Nonetheless, he remained active as an honorary member of staff.  Bill continued to engage with local industries and publish research articles.  Bill was a long-standing contributor to the biannual International Conference on Engineering Design (ICED) since its inauguration in 1981.  Bill and Andrew’s contribution culminated in ICED 05 when the Design Society accepted the Melbourne bid for the 2005 conference.  This was the first ICED conference to be held in the southern hemisphere and only the second not to be held in Europe.  All who attended that conference recall the success of the conference.

Bill had a strong social conscience.  He took a strong interest in refugees and what he regarded as their appalling treatment by successive Australian governments.  He sent many letters to his local government representative about his concerns.  Following a seminar at Melbourne’s Asylum Seeker Resource Centre, the audience was told that volunteers were needed to engage with refugees in the community.  Bill volunteered, and for many years he met with a Ukrainian refugee on a weekly basis at the housing commission flats in South Melbourne.  Often this meeting would be followed by lunch with academic friends at the University staff club, where Bill would offer an update about the English lessons and Australian cultural insights offered to his Ukrainian friend.  In more recent years, when Bill could no longer assist physically, he made substantial donations to the Asylum Seeker Resource Centre.

Bill joined a team who sought to the removing introduced noxious weeds from native forests (bushland).  This was also discussed at University staff club lunches.

Bill developed lymphodema and Parkinson’s disease, which resulted in mobility problems during his final years.  Despite this, Bill remained resilient.  He was happy in his family home until late in 2021 when a fall resulted in hospitalisation followed by admission to a nursing home.

Bill was husband to Elizabeth [dec], father to Anthony, father-in-law to Jane, and grandfather to Jeremy and Henry.  He is also mourned by dozens of his academic children and grandchildren who gained professionally and personally from his patience and wisdom as an inspired and inspiring teacher. 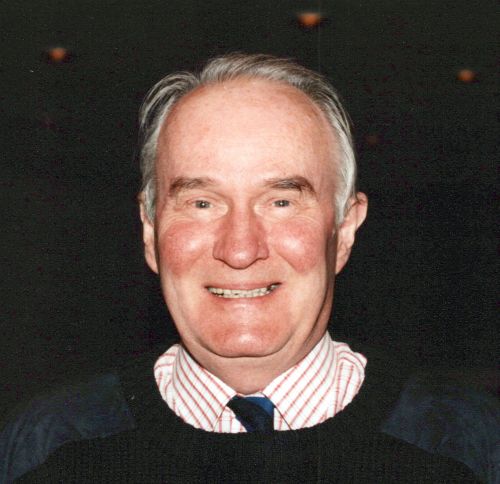 This site uses cookies and other tracking technologies to assist with navigation and your ability to provide feedback, analyse your use of our products and services, assist with our promotional and marketing efforts, and provide content from third parties. Privacy Policy.